More than 130 years in pharmacies to keep you feeling well

Innovating to ensure health and wellbeing

From the Antica Farmacia del Lazzaretto to the new frontiers of pharmaceuticals, Giuliani has always proudly remained a 100% “Made in Italy” company.

The history of the Giuliani Pharmaceutical Company began in Milan in 1889, in the Antica Farmacia del Lazzaretto. This is where the first formula was developed, the one at the heart of its first product, Amaro Medicinale.

Since then, Research, Health and Wellbeing have firmly remained the cornerstone of Giuliani’s work, the nucleus around which the modern pharmaceutical company was built, founded in the years following the founding of that first laboratory pharmacy.

Over the next 120 years, Giuliani’s research work actually intensified, extending to territories that had yet to be explored, exercising its power of innovation in areas corresponding to people’s new needs.

From the Antica Farmacia del Lazzaretto to the new frontiers of pharmaceuticals, Giuliani has always proudly remained a 100% “Made in Italy” company.

A journey of innovation
in the health field 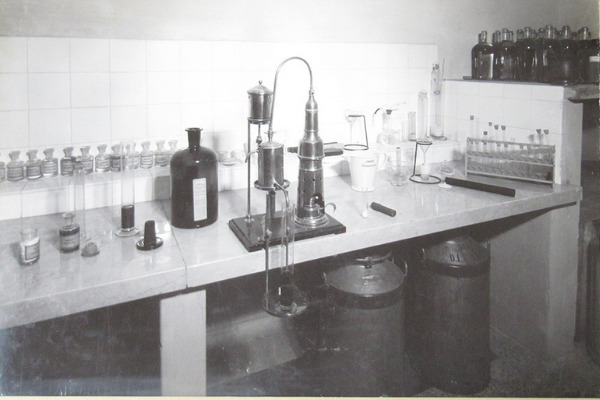 Dr Germano Giuliani, pharmacist and chemist having arrived in Milan from Arco di Trento (a town belonging to the Austro-Hungarian Empire at the time), buys the Antica Farmacia del Lazzaretto, a place full of history, symbolising medicine at the service of the people. The first pharmacy in the city, it was built in 1750 in the Lazzaretto area, set up in the 15th century outside the Eastern Gate to help with the treatment of epidemics. 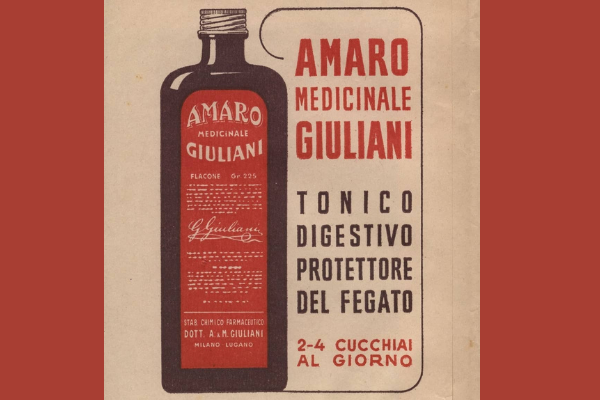 After conducting field research that would be considered a veritable clinical trial today, Giuliani fine-tunes the final formula of his Amaro Medicinale tonic. Thanks to word of mouth and customer satisfaction, the news of the effectiveness of the preparation spreads quickly and even reaches the royal family. 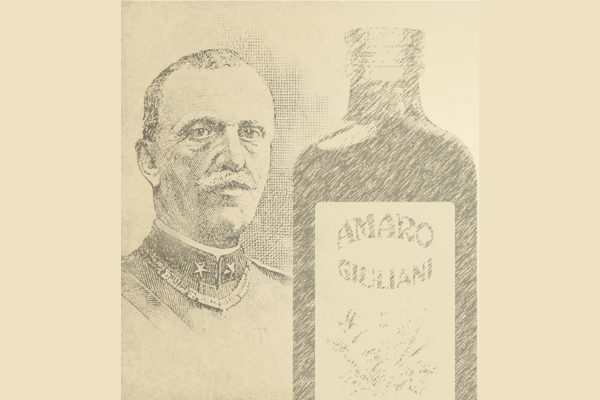 Amaro Medicinale Giuliani® is patented and the King of Italy awards it a bronze medal during the Universal Exposition in Milan, during the celebrations for the successes of Italian industry and technology, and on the occasion of the inauguration of the Simplon Tunnel (at the time the longest tunnel in the world). 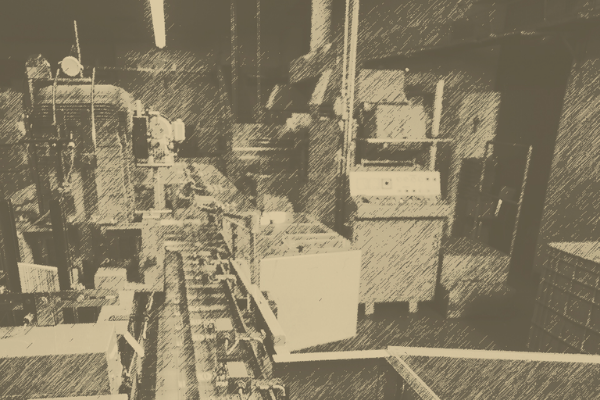 The old laboratory pharmacy becomes a fully-fledged pharmaceutical company, taking the name “Stabilimento Farmaceutico Chimico-biologico Dott. A&M Giuliani”. Moving from the Lazzaretto area, the first plant for the large-scale production of Amaro Medicinale opens in Via Pelagio Palagi, which is still the company’s headquarters today.

During the Second World War, due to the bombings that affected Milan, production is moved to Lora, on Lake Como. In 1947, with the reopening of the headquarters in Via Palagi, Giuliani now has two offices. 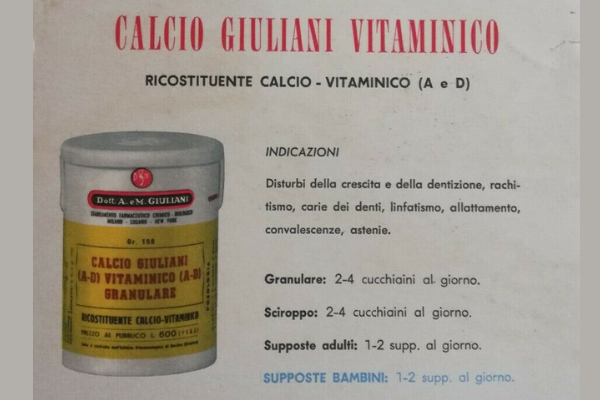 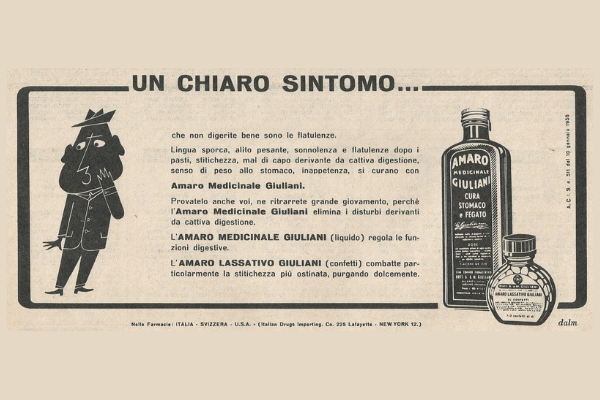 Giuliani’s is an innovative commercial, leaving its mark on the history of advertising: it is the first commercial that effectively combines commercial communication with a health education message.

Thanks to the appealing advertising slogan “Il Digestivo che in più attiva il fegato” (“The digestion aid that gets your liver going too”), Amaro Medicinale Giuliani® becomes the best-selling product on the Italian pharmaceutical market. Soon, every Italian family will have a bottle at home.

In the same years, Giuliani also reinvents the promotion of its products in pharmacies: the “Giuliani stand” is the first counter display specifically designed to showcase them to customers.

On the strength of its experience in the field of pharmaceutical research, Giuliani founds Edifarm, a publishing house for specialist magazines aimed at pharmacists, doctors and consumers.

The Giuliani Pharma Division is set up, developing new specialist treatments for the gastrointestinal tract in areas of intervention that have yet to be explored: Chenossil (cholesterol gallstones), Deursil (asymptomatic gallstones and dyspepsia), Bioflorin (intestinal bacterial flora supplement).

ASACOL® – Mesalazine is launched in Italy: with Mesalazine as its active ingredient, it is the first treatment for chronic intestinal inflammation.

In the United States, the Food and Drug Administration approves Deursil, a drug marketed in partnership with Ciba-Geigy (now Novartis) under the name of Actigall. 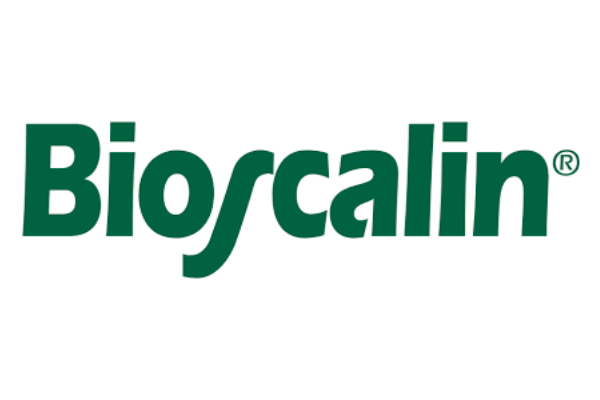 Bioscalin® is the first food supplement specifically formulated for the wellbeing of the hair. By fighting the damage caused by oxidative stress caused by free radicals, Bioscalin® gets hair back looking healthy and beautiful. A veritable innovation.

Thanks to the relaunch with a new patented active ingredient, Biogenina®, included in the formulation, Bioscalin® triples its sales: the brand becomes the leader in the hair loss prevention market in Italy, and the best-selling dietary supplement in Europe.

Giuliani acquires the Giusto® brand, a manufacturer of foods for coeliacs, diabetics and kidney disease sufferers. The acquisition represents the perfect example of the union of two cultures: science and diet. 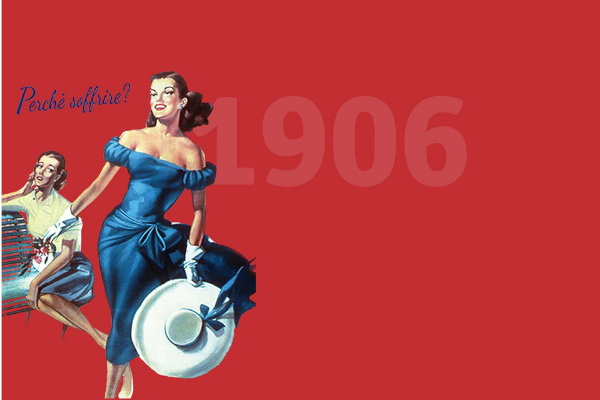 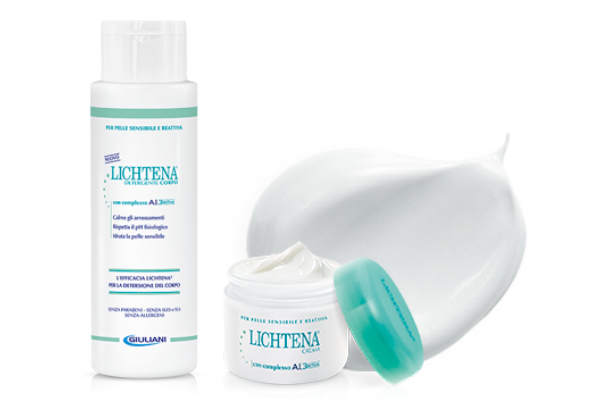 Giuliani acquires Trosyd®, a brand that produces a line of over-the-counter medication for the treatment of mycosis of the skin and nails.

Giuliani’s Medical-Scientific Information Division is set up through Dermatologists with the Tricovel®, Dermolichtena®, PSO2® and Kerà® product lines. 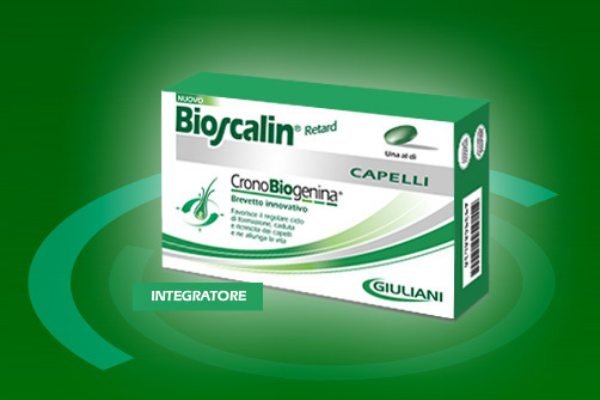 Giuliani Dermatological Research continues: for the Bioscalin® brand, Giuliani formulates the exclusive CronoBiogenina® complex, which prolongs the life of hair, and P-FULVINE®, an innovative multi-action hair loss prevention molecule for topical use.

MESAVANCOL® – Mesalazine is launched on the Italian market, in partnership with Nycomed/Takeda. With a new delivery system, the drug represents a veritable innovation in the treatment of chronic intestinal inflammation.

Giuliani Hair Loss Prevention Research continues its commitment to making Bioscalin® more effective: the innovative SincroBiogenina® complex is developed, while the R-Plus release technology makes the new active ingredients immediately available to the body, and therefore more effective in increasing the strength of the hair.

An innovative product results from Giuliani Nutritional Research, representing a veritable revolution in the world of gluten-free products: Sapori Tradizionali “Bontà di Pane” is the first type of bread to be made using wheat from which the gluten has been removed.

Giuliani adds Milice®, a popular, widely-used head lice treatment for topical use, Nidrox®, an antiperspirant foam, and Salax®, a cosmetic for skin imperfections, to its portfolio in its role as authorised retailer.

A line of medication enters the division of medical scientific information in dermatology.

Giuliani revolutionises hair loss treatment with a patented worldwide innovation, the S-R molecule, which stimulates the receptors of the hair follicle, conveying a signal to the hair. Bioscalin® Signal Revolution is launched. 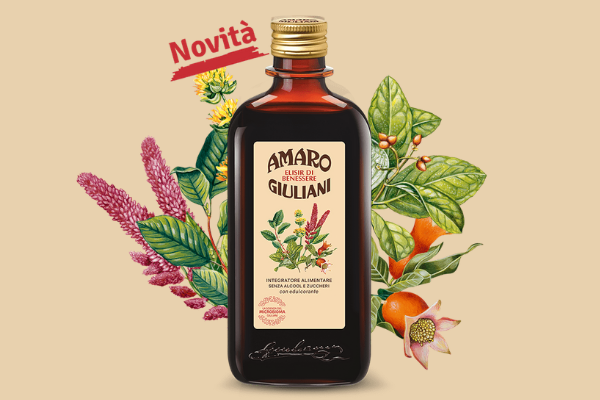 More than a tonic, a dietary supplement that is a veritable elixir rich in ingredients with digestive, prebiotic and antioxidant properties (cascara and pomegranate extracts), with active ingredients with a beneficial effect on the liver and intestinal flora (boldo, gentian and rhubarb extracts).